On Judging a Book by Its Cover (also new work) 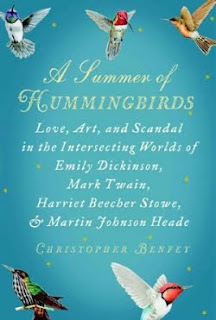 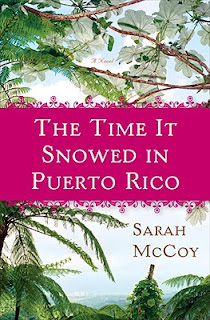 So, I have to admit that I have a weakness for pretty books. Right after the school year ended I made a goal to finish off a stack of beautiful books that I had started reading and yet not finished at one point or another. I finished two so far: A Summer of Hummingbirds by Christopher Benfey and The Time it Snowed in Puerto Rico by Sarah McCoy. Alexia picked the first one for me. She said that not only did she think that I would love the gorgeous hummingbirds on the cover, but the words “love,” “art,” and “scandal” would also intrigue me, and did they ever. I really enjoyed all the characters and even Benfey’s, at times desperate attempts of bring them all together through the symbolic hummingbird.
Although to me they are equally beautiful books, I only enjoyed Benfey’s gathering of historical specifics to create a book that reads almost like a novel. Even though I already knew what happened to the characters individually, it was great to read about the symbiotic connections between each other and to the brilliant hummingbird.
As far as The Time it Snowed in Puerto Rico, I almost didn’t finish it. It was a bit choppy, with simple sentences that were anything but clever. McCoy sprinkled Spanish words here and there for authenticity, but even for someone who is fluent in Spanish, the words were distracting.
I am certainly not a book critic, as I have issues with spelling and basic grammar myself. My point is that sometimes even though it is not advised to judge a book by its cover, a book chosen for its attractiveness might be enjoyable and if not, you still have a beautiful cover to sit on your desk. *Judging a book by its cover never applies to people, animals or plants, of course. 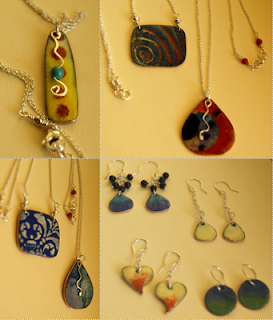 The times between readings have been filled with unpacking and creating enameled jewelry. It was an honor to be the guest artist for A Jeweler’s Art in the Paseo Arts District in Oklahoma City. Please excuse the awful photos, as I was in a hurry.

Popular posts from this blog

August 07, 2014
Sunflowers in Cobalt Blue Vase,   Oil on 5 "x7"   Linen Panel SOLD  Private Collection in San Saba, TX First, I must say that everything I paint is because I absolutely love. I don't like to paint things that I don't find to be attractive to me for one reason or another. Sometimes it's sentimental reasons and other times it's as simple as beautiful colors or the texture. Either way, it's something that I want to capture and stare at for long periods of time. I want to study it and how it affects the environment around it, as in the case of Sunflowers in Cobalt Blue Vase does. In that respect, I feel ALL my paintings are a labor of love.  More often than not, I have to create a painting, wipe it all down, and start all over again if something is just not working. Some never get completed and I just end up painting something totally different on that panel. Then there are some, that I just have to paint, no matter how much trouble they are giving
2 comments
Read more

Carolina Elizabeth
CarolinaElizabeth@cox.net This serves as a record of my journey as an artist. Sharing with you my inspirations, challenges, and hopefully many stories of a successful adventure in creating art.