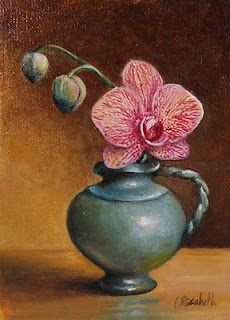 Sweet Heart Orchid in Green Vase 5"x7" Oil on Linen Panel
I have been painting diligently, as I promised. I have finished several paintings, most definitely with spring in mind. The first one is of a small vase I found a while back during one of my antique shop huntings. The orchid in it is a Phalaenopsis, which I think is called the 'Sweet Heart' orchid. I love orchids and this one has been blooming since Valentine’s Day. We got it at the OSU-OKC Farmer’s market for a couple that sell orchids there regularly. If you are in the hunt for the flowers, that is the place to get them. They are at a fair price (considering they will bloom for almost a month) and they are very helpful. 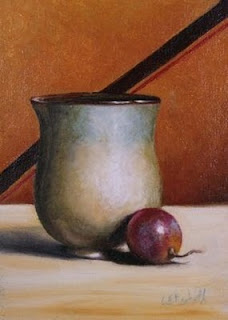 TeaCup with Grape 5"x7" Oil on Linen Panel
SOLD
My second painting is a teacup with a grape. That one is just inspired by the color combinations of both items together. I am very pleased with the look of the grape. I was having a difficult time getting that frost look on it, just right. 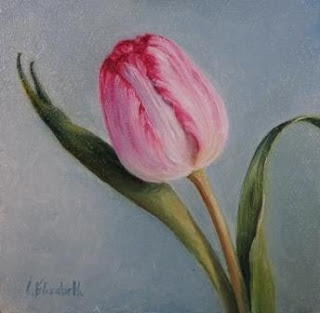 Single Early Tulip 6"x6" Oil on Linen Panel
SOLD
I just finished my pink ‘single early’ tulip which demonstrates my eagerness for winter to end. I am also working on some daffodils and a triumph tulip (shown on the right “On My Easel Now”). I kept wanting to cut the daffodils and bring them in for my still life, but it was my only real sign that spring was coming and I just couldn't do it. Well, last night when they were promising us the "blizzard" I thought that if I didn't cut them, they would freeze and I would no longer see them in the proud state they are in. So, I brought them in and starting painting them last night at 2 in the morning.
I am officially done with winter. I am now waiting for confirmation from the weather.

Popular posts from this blog

August 07, 2014
Sunflowers in Cobalt Blue Vase,   Oil on 5 "x7"   Linen Panel SOLD  Private Collection in San Saba, TX First, I must say that everything I paint is because I absolutely love. I don't like to paint things that I don't find to be attractive to me for one reason or another. Sometimes it's sentimental reasons and other times it's as simple as beautiful colors or the texture. Either way, it's something that I want to capture and stare at for long periods of time. I want to study it and how it affects the environment around it, as in the case of Sunflowers in Cobalt Blue Vase does. In that respect, I feel ALL my paintings are a labor of love.  More often than not, I have to create a painting, wipe it all down, and start all over again if something is just not working. Some never get completed and I just end up painting something totally different on that panel. Then there are some, that I just have to paint, no matter how much trouble they are giving
2 comments
Read more

Carolina Elizabeth
CarolinaElizabeth@cox.net This serves as a record of my journey as an artist. Sharing with you my inspirations, challenges, and hopefully many stories of a successful adventure in creating art.